Pond:
Last week the smallest pond, where the well brings in water, got treated for algae. He tried to spread out the treatment to minimize the impact on the fish, but we got a report that the fish were struggling. It seems to be better now, although there are about four dead carp.

This pond could use more oxygen. The well water feeding it has none, so dilutes the oxygen content of the pond. There was discussion of strategies, including two methods of oxygenating the well water, or installing a solar powered fountain. David P, O’Neil, and JJ will continue looking into options.

JJ mentioned that many of the pond carp have grown enormous, and are doing a poor job keeping down the grass. We could use some more small ones.

Landscape:
There is a tree in the median near The Bluff that needs to be removed. Do we want to replant a tree or use sod?

Last week David B cut down weeds and small trees along Hollingshed to make it easier to turn left out of that exit. David B said they seemed to have done it in the ditch itself, just not up the slope and to the tree line. There was discussion that the landscapers were supposed to do that. O’Neil will clarify with them just how far they should be keeping clear.

A resident asked about weeds in the bushes along the fence by the pool. O’Neil explained that they have to be cut low and treated, and it takes some skill to do it right without harming the bushes. He will try to teach someone.

Pool:
Mostly the pool has been doing well. A resident reported that cleaning is not happening as it should. She also mentioned an incident this month involving inappropriate behavior that was not addressed by the attendant. It seems no one was willing to approach a large, menacing-looking man with an ankle monitor. JJ reiterated that the monitors have been told to call police for backup if they don’t feel safe dealing with behavior. John will follow up with the pool company, and emphasize that we don’t want monitors who are not comfortable doing their job.

Budget:
David B has been looking at the financials year-to-date and it looks like we’re under budget so far. Halcyon seems to be doing a good job monitoring and keeping records.

He mentioned that we haven’t used any of the “special projects” money. He suggested saving it for next year so we can have enough for the tennis courts. JJ reminded us that special projects are usually new things, while tennis courts would be maintenance and repair of existing infrastructure; this is what reserves are for. He suggested we look at sun shades for the playground, and a new overlook for the river.

Other:
JJ mentioned that there have been complaints about solicitors. The HOA has little influence in this matter and no enforcement powers. We do have signs at the entrances, which means homeowners can call the police and the police will remove the solicitors, but it’s up to each resident at the time. We’ve done what we can proactively do.

The surveyors seem to be finished on The Pointe (Stable Ridge). The LIDAR markers are gone. Are we still in contact with the developer? David B said yes, and thanks for the reminder, we’ll reach out again to let them know we’re still watching.

A resident asked if there has been any progress on rules enforcement. We have; in fact we were supposed to vote on it tonight but David B forgot to bring the final draft. We should have it done by email very soon and can make notice to the community.

We also realized that some of the things we want to enforce are also against municipal code for Columbia, including parking on grass and bringing in trash cans. We’ve contacted the Code Enforcement Division for help.

For Past Meeting Minutes 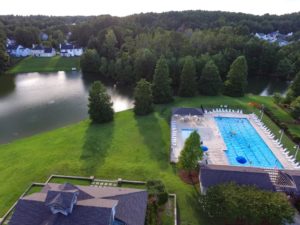